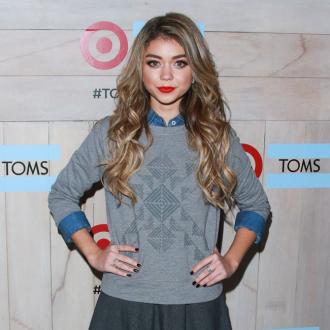 The 'Modern Family' star, who obtained a permanent restraining order against ex-boyfriend Matthew Prokop in October after claiming he abused her for four years before she ended their relationship in August, was spotted kissing her former 'Vampire Academy' co-star outside Warwick nightclub in Hollywood on Saturday night (31.01.15).

The rumoured couple have yet to confirm their relationship, but the 24-year-old British actor thanked his fans for respecting his privacy on Twitter, writing: ''I want to give thanks to all that respect my privacy''

The duo, who met on the set of the fantasy comedy last year, were first spotted kissing at the opening of West Hollywood's hot spot Blind Dragon on January 15.

An eyewitness told UsMagazine.com: ''They were talking close and she had her hand on his leg. Then they would kiss.''

The blonde beauty recently admitted she was open to dating again and was eager to find a funny boyfriend.

She said: ''My type is people who make me laugh. I don't think it's so much about looks. It's about personality, honestly - a sense of humour, sincerity, ambition and drive.''

Sarah was granted a restraining order against Matthew after accusing the actor, 24, of verbally abusing her and pinning her against a car during an argument about her outfit in May and choking her.

She also claimed he ''relentlessly bombarded me with vile, threatening and emotionally disturbing texts and voice mails including his own suicide threats''.

The former couple started dating after meeting while auditioning for 'High School Musical 3: Senior Year' in 2008. They later starred together in the Disney Channel film 'Geek Charming' in 2011.