Hollywood stars flocked to the Temple Emanu-El in Manhattan this morning to attend Joan Rivers funeral following her death earlier this week. 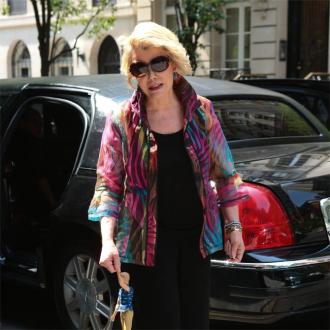 Hollywood stars flocked to the Temple Emanu-El in Manhattan this morning to pay their final respects to the 'Fashion Police' host, who passed away last Thursday (04.09.14) following surgical complications.

Andy Cohen, Kathy Griffin and Kristin Chenoweth also turned up at the place of worship to say their final farewell to the legendary comedienne, as did fashion designers Carolina Herrera and Michael Kors.

Mourners lined up outside the synagogue and waited for their names to be checked off the list before walking in to the private memorial service.

Around 500 spectators and at least 100 media stood behind barricades on Fifth Avenue before the ceremony to honour the 81-year-old comedienne.

It appears the blonde beauty's wishes have been met as she previously claimed she wanted her funeral to be a star-studded, glamorous event.

In her 2012 memoir, 'I Hate Everyone... Starting with Me,' she wrote: ''When I die (and yes, Melissa, that day will come; and yes, Melissa, everything's in your name,) I want my funeral to be a huge showbiz affair with lights, cameras, action.''

Joan's daughter Melissa, 46 - her only child - announced her mother's death three days ago following a week in a medically-induced coma and on life support at Mount Sinai hospital in New York.

Joan had been rushed to the medical centre on August 28 after she suffered a cardiac and respiratory arrest while undergoing a routine operation on her vocal cords at Yorkville Endoscopy clinic on August 28.

An investigation into Joan's death is currently underway following an inconclusive autopsy.