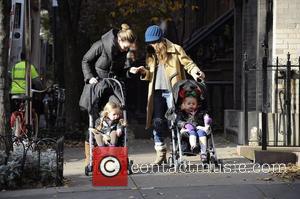 The fashion campaign has been entitled 'Electric Holiday' and a 5-minute animated film has been released as part of The Walt Disney Company and Barney's Madison Avenue store's collaboration. The film features Minnie Mouse spotting a fabulous dress in a store window and fantasising about the Paris Fashion Week where she imagines she is snapped by the paparazzi looking glamorous and is joined by animated versions of Sarah Jessica Parker, Lady Gaga, Daphne Guinness, Naomi Campbell, Linda Evangelista, Bryan Boy and Carine Roitfeld as well as fellow Disney creations Daffy Duck, Cruella de Vil, Snow White, Tinkerbell and, of course, Mickey Mouse to name but a few.

In the spirit of the occasion, the 'Sex and the City' star sported rather stylish looking black lace Minnie Mouse ears designed by Rag & Bone and L'Wren Scott as she posed next to the Disney damsel herself. As part of the spectacular holiday campaign, 25% of all sales of limited edition products (including those ears) will be donated to the Red Cross in support of the Hurricane Sandy relief campaign.