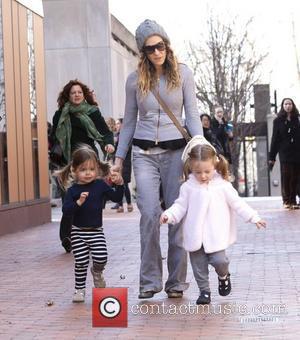 Picture: Sarah Jessica Parker out for a walk with her twin daughters Tabitha Broderick and Marion Broderick in Manhattan New York City, USA - 24.01.12

Sarah Jessica Parker will replace Demi Moore as Gloria Steinem in the Linda Lovelace biopic, not her namesake Weeds star.
Earlier this week, insiders claimed Mary Louise Parker had landed the role of the feminist icon in Lovelace, but filmmakers Rob Epstein and Jeffrey Friedman have confirmed to Entertainment Weekly magazine they've signed the Sex & The City star up for the part.
Amanda Seyfried leads the cast as the X-rated actress-turned-anti-porn activist.
Moore dropped out of the film on Tuesday (24Jan12) after she was hospitalised on Monday night (23Jan12).
The actress has subsequently checked in and out of a treatment centre, seeking help for exhaustion and to "improve her overall health".
Sarah Jessica Parker will begin filming on Monday (30Jan12).