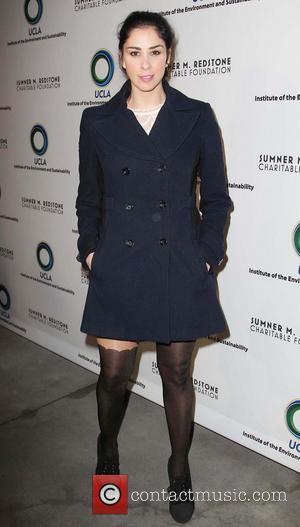 Comedienne Sarah Silverman and actor Michael Cera launched the new YouTube comedy network 'Jash' with sketch duo Tim Heidecker and Eric Wareheim and rap-comic Reggie Watts at the South by Southwest Festival in Austin, Texas, on Sunday (March 10, 2013). The high profile foursome jumped at the chance to start-up the network after being approached by Google to produce comedy material for a new online source.

"We each have pages within Jash and we each can curate those pages," Silverman told the Hollywood Reporter at the Texan festival, "This is what we think is funny. It may not be your cup of tea, but there's no testing involved, there's no second-guessing of what a 14-year-old boy would like. It's just a place to do stuff and fail or not fail." The group is already hard at work on material to fill Jash's pages, with Silverman preparing a "French film noir trailer" while Cera - fresh from working on Netflix's Arrested Development revival - is creating a 25 minute short film.

With the talent in place, Jash has called in the heavyweights to pull the levers backstage. Douglas De Lucas - a co-executive producer on Jimmy Kimmel Live! - and Daniel Kellison, the creator of Crank, Yankers and The Man Show, will oversee things.

We'll have to wait for our first glimpse at the comedy network, though funny-man Wareheim promises a "bullshit-free experience."