Saturday Night Gym Club - Suddenly The Feelings Are Ours

Self-confessed Anglo-Irish multi-instrumentalists Saturday Night Gym Club unveil a psychedelic video for their trippy new track 'Suddenly The Feelings Are Ours' which features on their second EP 'The Nowhere Team' available now to download.

The video was created by Paul Higham and is a simple for thought-provoking montage. It begins with a blurred image of a person in the behind some fuzzy coloured lines and patterns before changing in time with the music where we see silhouetted people dancing through a chaotic, coloured, kaleidoscopic world. Throughout, there is a brief flashing image of person looking to be in deep thought, as if this is all going on in her head. It's grainy, like poor graphics, which emphasises a retro theme as the trip hop sound itself feels very nineties. The repetitive, echoing vocals feels like an undercurrent on this track which is synth heavy but with a summery dance drum beat.

The group; who are vocalist and sampler Alan Sanderson, synth player Conor O'Kane, bassist Nick Crowe and violinist/ synth player Tom Bounford; return after a successful turn with their debut EP 'How To Build A Life Raft' which even lent itself to a TV commercial. 'Suddenly The Feelings Are Ours' follows their acclaimed lead single 'Terra Firma'.

Electronic quartet Saturday Night Gym Club have unveiled a touching, love story video for their single 'Terra Firma' which will feature on their upcoming new EP 'The Nowhere Team' due out on June 10th 2013.

The video features a foreign man getting a job in a crop field. He meets an English woman who works there and is kind to him but because he can't speak English, he struggles to communicate with her. He decides to learn the language and spends the next few days pouring over English language books and listening to audio CDs. He makes an attempt at conversation when she is waiting for her lift home, but she looks a little confused and leaves. He eventually decides to steal a car and offer to drive her home instead as a sure way of breaking the ice. The song itself is slow and echoey, though the tone seems more melancholic than romantic. Nonetheless, it is a smashing, dreamy number that makes perfect easy listening for relaxing in the Spring sunshine.

The band; who are vocalist and sampler Alan Sanderson, vocalist and pianist Conor O'Kane, vocalist and bassist Nick Crowe and violinist Tom Bounford; release their new EP following up their critically acclaimed debut EP 'How To Build A Life Raft' which did not fail to gain attention right across the UK.

Okay, so the artwork isn't exactly world beating, but what's inside this tasty little package is much better so there's no need to fret. 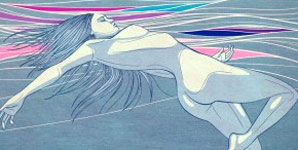 Saturday Night Gym Club's latest single, I Know, features vocals from Ellie Walker and is taken from the band's long awaited debut EP, How To Build A Life Raft, which will be released on March 5th, 2012. Saturday Night Gym Club - Suddenly The Feelings Are Ours Video Saturday Night Gym Club - How to Build A Life Raft