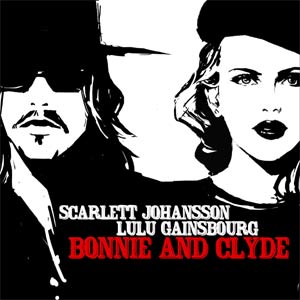 Scarlett Johansson has teamed up with Lulu Gainsbourg, son of iconic French artist Serge Gainsbourg and Bambou (actress, model and singer), to release a unique cover of 'Bonnie and Clyde.' The single is the first track to be released in the US from Lulu's tribute album to his father, and will be available via ITunes on July 31st. Slated for an October 30 release with MBM Records, From Gainsbourg to Lulu is a special collection of covers handpicked by Lulu, including collaborations with Rufus Wainwright, Johnny Depp and Vanessa Paradis, Iggy Pop, and more. Lulu and several guests on the album will perform select shows in NYC this winter.

Born Lucien Gainsbourg, Lulu is the half-brother to world-renowned actress and singer Charlotte Gainsbourg. He started playing piano when he was five years old and later attended the Music Conservatory of Paris at the age of eight. Accepted into Berklee College in 2007, Lulu composed a song for French singer and actor Marc Lavoine's 2009 album Volume 10 during his term, and assisted Beck who produced his sister's third studio album entitled IRM.

From Gainsbourg to Lulu is a project that he considers as a heartfelt gift to his father. Lulu took it upon himself to select the tracks he knew would best pay homage to his father's work, as well as reach out directly to all of the guest artists himself to bring the album together. Working on the release was a labor of love for Lulu, who acted mainly as a producer/director, skillfully crafting each song with his own influence to compliment the guests. Now a graduate of Berklee, and off the back of a successful release in France to critical acclaim, Lulu is permanently living in New York and ready to spread his new legacy in the US.