Rapper Diddy has undergone knee surgery after two years of dealing with an injury. 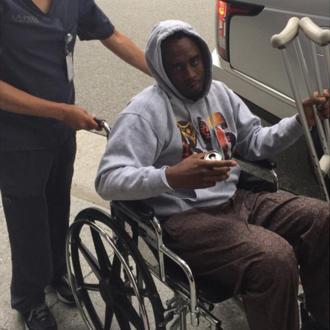 The rapper - also known as P Diddy and Puff Daddy - shared a picture of himself on Instagram in a wheelchair pushed by a nurse as he left hospital on Thursday (23.7.15) following the procedure.

He captioned the image: ''Fresh outta knee surgery!!! Been putting it off for 2 years, this s**t hurts like a motherf**ker! Shoutout to my doctor, Dr.Ahluwalia, I hope you did a great job, LOL!! (sic).''

Diddy, 45, casually dressed in a sweatshirt with his hood up, can also be seen carrying crutches in the snap.

He did not specify exactly what was wrong with his knee but claimed he had been dealing with the problem for two years.

However, it is likely that whatever issue he had with his knee was aggravated when he fell through a hole in the stage at the BET Awards in June.

The incident happened during his performance of 'It's All About The Benjamins (Remix)', in which he was joined by several artists, including Lil Kim, Faith Evans and French Montana for a medley of his greatest hits to celebrate the 20th anniversary of Bad Boy Records.