Rap Mogul Sean 'Diddy' Combs Is Celebrating His 46th Birthday On Wednesday (04nov15) By Giving Away Free Music To Fans. 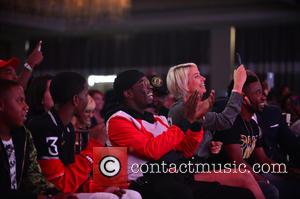 The hip-hop star held a listening party for his new album MMM in New York City on Tuesday night (02Nov15), and he revealed fans would be given the chance to get hold of the album for free on his big day.

The record features collaborations with stars including Wiz Khalifa, French Montana, Lil Kim, and Future, and the cover artwork is a picture of the rapper with British model Kate Moss.

"Good morning New York... Today is my birthday," he declared in a video posted on his Instagram.com page. "And as a celebration, I'm dropping a album (sic), a sonic motion picture, today and it's gonna be free.... MMM."

The rapper also revealed he would be spending the day walking around the streets of the Big Apple to celebrate his birthday with fans.

"I decided that all day I'm just going to walk around the city of New York and spend it with my people!" he wrote in an Instagram message. "Today is going to be a great day! Celebrate with me people! I give God all the glory for blessing me with another year!! #MMM comes out today!!!! I'm very excited!"