Sean 'Diddy' Combs Is Recovering From Surgery For An Undisclosed Knee Injury. 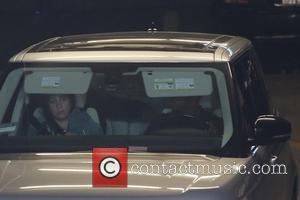 The Bad Boy Records boss took to Instagram.com on Thursday (23Jul15) soon after the procedure, posting a photograph of himself being pushed in a wheelchair and holding crutches in his left hand.

He wrote, "Fresh outta knee surgery!!! Been putting it off for 2 years, this s**t hurts like a motherf**ker! Shoutout to my doctor, Dr. Ahluwalia, I hope you did a great job, LOL (laugh out loud)!!"

Dr. Sonu Ahluwalia is an orthopaedic surgeon based in Los Angeles, and has treated several professional athletes from U.S. baseball, football and hockey teams.

News of Combs' surgery comes weeks after the rapper took a tumble into a hole in the stage while performing at the BET Awards in June (15). The rapper jumped right back up following the fall, insisting he was not injured. He later wrote on Instagram, "I was getting so loose I fell! LOL (laugh out loud), but really though I busted my a**!