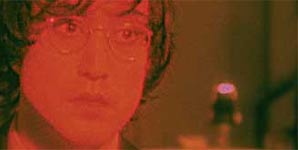 Friendly Fire, the solo album from Sean Lennon, will be released on Parlophone on October 2nd.

Following Into the Sun, Lennon's acclaimed 1998 solo debut, Friendly Fire is a cinematic suite of songs which share the same dizzying wealth of musical styles as its predecessor, but eschews some of its freeform tendencies for more traditional song structure and some unifying themes.

"There was a long period after the first album where I felt disillusioned with the machinery of the industry," says Lennon. "It's not that I stopped recording, playing and performing, I did all of those things, just more discreetly. Friendly Fire is an experiment to see what it might be like to do music more publicly again."

Produced by Lennon, the Friendly Fire sessions really got underway when he asked producer/engineer Tom Biller (among other things Jon Brion's trusted mixer for his recordings with Fiona Apple and Kanye West, as well as for Eternal Sunshine of the Spotless Mind) and drummer Matt Chamberlain (Pearl Jam, Tori Amos) into the studio for two weeks of collaboration.

Where Lennon played most all instruments on his debut, the Friendly Fire sessions found him still writing most of the parts, but conjuring a shape-shifting "band" to record live to tape, mostly in single takes. Other participants included Jon Brion (organ, guitar, additional drums), Cibo Matto's Yuka Honda (piano, keyboards, bass), Harper Simon (guitar) and Bijou Phillips (background vocals), among others.

A childlike piano prelude introduces sweeping album opener "Dead Meat," the sweetest, most lush-sounding song to ever warn "In the end you're gonna learn/All you get is what you deserve." Similarly, the dark romanticism of the gentle, melodic "Parachute" intones "If I have to die tonight/I'd rather be with you."

The smoky, endearingly spooky "Tomorrow" is a cursed lovers' ballad picked up via deep-space transistor radio. Driven by handclaps and acoustic strumming, "Headlights" is most propelled by its gracefully-unfolding vocal harmonies. And a near-unrecognizable psychedelic reworking of Marc Bolan obscurity "Would I Be the One" floats and disperses before the album's final track, and perhaps its most literal, the forlorn and orchestral "Falling Out of Love."

Lennon has also produced a short film for each of the album's tracks, directed by Michele Civetta. The fantastical shorts, which together comprise a conceptual film about betrayal and the failure of love, feature appearances from Lennon and friends including Lindsay Lohan, Bijou Phillips, Asia Argento, Carrie Fisher, Devon Aoki, Jordana Brewster and others.

Sean Lennon - Falling Out Of...

A Monster In Paris