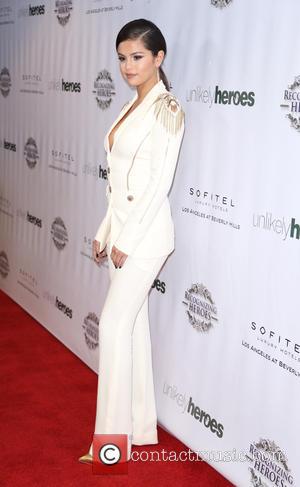 Picture: Selena Gomez - A variety of stars were photographed as they arrived to show their support at the 3rd Annual Unlikely Heroes Awards Dinner and...

Pop star Selena Gomez and actress Ashley Benson were among the famous faces who attended a baby shower in Los Angeles to mark the impending arrival of Scooter Braun's first child.

Braun, who manages Gomez's on/off boyfriend Justin Bieber, is preparing to welcome a baby with his wife Yael Cohen, who he married in July (14), and the mother-to-be's friends turned out for her shower over the weekend (15-16Nov14).

Gomez and Benson attended the bash at The Nice Guy restaurant in Los Angeles, along with actress Sophia Bush, who tweeted a picture of herself posing with the expectant parents with the message, "So happy I got to celebrate these two & BabyBraun today. So happy for you loves! (sic)."

Selena Gomez to star in and executive produce Hotel Transylvania 4