Selena Gomez's upcoming track with Marshmello is her 'favourite song'

Selena Gomez's upcoming track with Marshmello is her ''favourite song''. 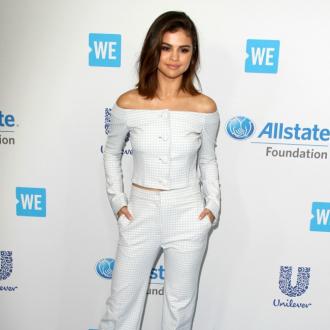 Selena Gomez's upcoming track with Marshmello is her ''favourite song''.

The brunette beauty has confirmed she has teamed up with the EDM artist and record producer on a new single, and the 'Kill Em With Kindness' hitmaker has admitted the mystery song is ''one'' of her most preferred records she has made.

Speaking to Tonya and Sonic on the Energy 103.7 radio station, she said: ''It's one of my favourite songs.''

And the 25-year-old singer has described the collaboration to her ''stepping into'' his world, although she has hinted she will be bringing her own style to the track.

She said: ''It's really cool. It's kind of in that world, his world, and I'm stepping into it and bringing my style too.''

And the former 'Wizards of Waverley Place' actress has teased she will be working and releasing ''a lot more music'' in the future.

This news comes shortly after Selena - who is currently dating The Weeknd, whose full name is Abel Tesfaye - admitted she was desperate to collaborate with Eminem.

Speaking previously about the one artist she would love to join forces with, she said: ''Eminem (sic).''

And the 'Fetish' musician has hinted she would also like to partner with DJ Kygo again after they released 'It Ain't Me' earlier this year, because she feels like she creates a ''whole new sound'' when she works with the musician.

When asked if the duo will work together again, she replied: ''I like feeling like i'm creating a whole new sound each time I collaborate. @KygoMusic's sound is so unique, I loved being a part of it. (sic).''