Selena Gomez enjoys a relaxing Saturday night by hanging with fellow pop-star Taylor Swift while they joke around on Facetime with Demi Lovato, not a bad way to spend your evening! 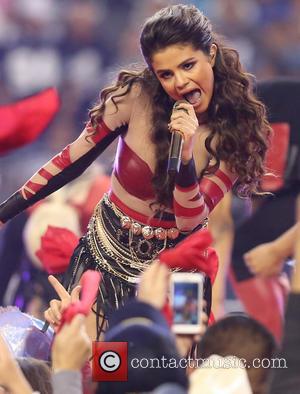 Picture: Selena Gomez - Selena Gomez performs during the halftime show during a Thanksgiving Day NFL football game between the Oakland Raiders and the Dallas Cowboys...

It was first reported that the 21 year-old wanted to spend time with her family as well as resting after working so hard.

But over the weekend it was widely reported that Gomez was forced to cancel those shows due to health issues, as she suffers from the Autoimmune Disease Lupus.

This must be a stressful time for the 'Come & Get It' singer so it is nice to know she can count on her fellow showbiz friends.

Gomez posted a photo on her Instagram page this past Sunday (Dec 29th), of herself, Taylor Swift and Demi Lovato sharing a Facetime moment.

In the pic Gomez and Swift are holding white mugs while chatting to Lovato on Facetime, and they appear to be having a good time as Taylor appears to be doing something to make her two besties laugh.

This is exactly what the 'Love You Like A Love Song' singer needed after postponing her 'Stars Dance' tour dates. She released a statement at the time which said;

"My fans are so important to me and I would never want to disappoint them. But it has become clear to me and those close to me that after many years of putting my work first, I need to spend some time on myself in order to be the best person I can be."

Selena nor her team have commented on the reports on if she is suffering from Lupus.