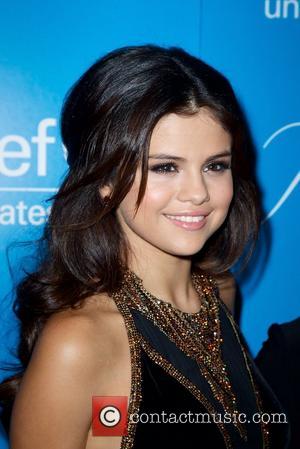 Children's charity UNICEF has hosted a black tie gala every winter since 2005 called the Snowflake Ball, "to celebrate the lighting of the UNICEF Snowflakes and to honor those whose philanthropic commitments support its mission to save children's lives," the official UNICEF website states. In 7 short years the event has raised a massive $16m for their causes and continued to do so last night. In attendance were two of Hollywood's brunette beauties, Katy Perry and Selena Gomez.

Both stars opted for particularly festive outfits, though nothing outlandish. Their dresses were navy and black but were embellished by sparkly detail that picked up the lights of the room. Selena went for a backless Dolce and Gabbana halterneck number, while Katy Perry's Naeem Khan gown was semi-translucent with floral cut out lace, reports the Mirror.

Uma Thurman and Tony Bennett also attended the event and many celebs opted to tweet their continued support of the massive philanthropic ventures of the charity and its benefactors.

Likewise, Gomez showed her support via the social networking site as well:

So proud to be a part of @unicefusa we raised 2.5 million dollars tonight!! #unicefsnowflake

UNICEF has been in the news for far less positive reasons lately after coming under attack from that all knowing political and social guru Donald Trump. According to the big man, "Reports are out there that many CEOs of charities are getting overpaid, while their causes are seeing very little..." and he urger his followers to "... ...Do your research before donating this holiday season!" because, for example, "[email protected] Caryl M. Stern CEO is driving around in a Rolls Royce..." It seems that Trump should take a dose of his own advice, because, as Caryl Stern replied:

[email protected]realdonaldtrump sorry no rolls; only a prius. fire your fact checker and help us save kids lives.

We ardently hope that no one takes Trump seriously because unlike his inane threat to Obama before the election, this really could cost kids lives.