Review of Cursing The Sea Album by September Girls

Dublin five-piece September Girls might be named after a Big Star song (give or take the odd "U" here and there) and revel in luscious harmonies and bubblegum choruses, but scratch away at the surface and there's a pugnacious undercurrent to their winsome pop. 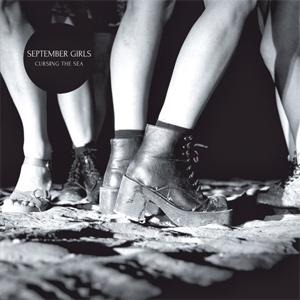 While comparisons with Talulah Gosh, The Primitives, Shop Assistants and The Jesus & Mary Chain aren't exactly wide of the mark and therefore inevitable, it's the tough-as-nails sentiment behind songs like 'Heartbeats' and 'Sister' that set them apart from many of their current contemporaries. Having first burst onto the spotlight at 2012's Indietracks Festival having formed a year earlier, it's clear when listening to the twelve songs that comprise 'Cursing The Sea' that their ambitions lie beyond the shambling lo-fi indie scene they've emerged from.

Not that 'Cursing The Sea' represents an exercise in lavish production. Drenched in feedback and reverb, vocals low in the mix and drums that echo relentlessly like a musical pneumatic drill, it's a record that combines all the youthful exuberance expected from a quintet barely out of their teens with an, at times, unsettling honesty. Aforementioned former single 'Heartbeats' might ride along merrily on the crest of an insistent riff recalling The Violent Femmes 'Gone Daddy Gone', yet lyrics such as "Don't call me baby, I'm not yours." suggests anything but a saccharin coated love song.

Veering between latent mid-eighties prototype indie pop and its post-millennial US equivalent executed so well by the likes of Dum Dum Girls and Frankie Rose, the fuzz-filled title track, Spector-esque 'Another Love Song' and reflective 'Ships' all feel comfortable had they been released in any of the previous four decades. The angular stabbing melody of 'Left Behind' coupled with Sarah Grimes' tribal drumbeats recalls Leeds post-punkers Au Pairs at their finest, while 'Green Eyed' also fuses ethereal vocals and chiming guitars over a sumptuous backbeat to maximum effect.

While 'Talking' and 'Someone New' continue with the frantic pace, it's closing couplet 'Secret Lovers' - the oldest song on the record - and 'Sister' that resonate with indignant sincerity. Where the former tells a tale of unrequited love over a melancholy passage, the latter's subject matter tackles the aftermath of rape in a thought-provokingly intelligent fashion.

Although 'Cursing The Sea' won't win any prizes for originality, it's a well-crafted collection oozing with zest and an air of confidence way beyond their tender years. What comes next should be a very exciting prospect to ponder indeed.