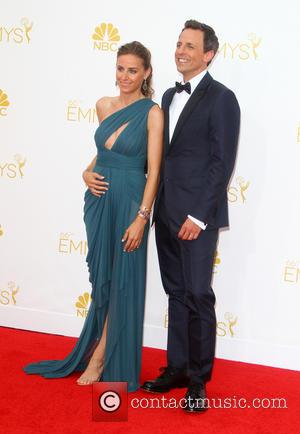 Comedian Seth Meyers was hospitalised over the weekend (06-07Sep14) after breaking his nose in a game of street hockey.

The New Year's Eve actor-turned-Tv chat show host reveals he was enjoying a game with his college pals in Boulder, Colorado, when he suffered the injury.

Explaining the incident on Monday's (08Sep14) episode of U.S. talk show Late Night with Seth Meyers, he said, "We decided it would be really fun, since we've known each other since we were in college, (to) play street hockey...

"I gave a speech like you would give in a sports movie. I said, 'Gentlemen, we're at the age now where this is likely the least time we're ever going to play street hockey, so leave it all out on the pavement (go for it). The rest of your life don't regret anything about this last game because you'll have to live with it for the rest of your life.'

"Cut to 30 seconds later, a friend smashes me in the nose with his stick and I hit the ground and immediately - immediately - knew that my nose was broken, and said so. My friends couldn't hear me because they were all laughing. So much laughter! As much laughter as blood!"

Showing off photos of the injury, Meyers, whose make-up artists helped to cover up the bruising for Tv, added, "It was bad. My nose was going a completely different direction."