The 40 year-old talk show host will now be taking the helm of the biggest television award ceremony of the year. 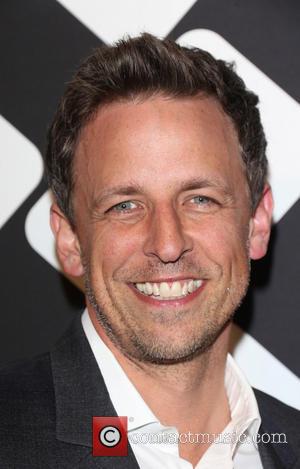 The 40 year-old funyman has signed on to emcee the 2014 Emmy Awards.

The ceremony, which will be the 66th addition, will take place live from L.A.'s Nokia Theatre on August 25th.

The announcement was made by NBC this past Thursday (April 24th), in which they complimented Meyers' multitalented abilities.

"Seth's expertise and ease in front of a live audience during his time at SNL, as well as his comedic brilliance both as a writer and in front of the camera on SNL and Late Night, makes him the perfect choice to host the Emmys," said the head of NBC's late night and alternative programming, Paul Telegdy.

"Seth is such a talented performer and writer, and we know he will bring something unique to hosting the Prime-time Emmy Awards," Bruce Rosenblum, chief executive and chairman of the Television Academy, added.

This will be Meyers' first hosting gig of an award ceremony, but it isn't rare for the television network to choose a personality featured on their own channel.

The 'New Year's Eve' actor is most well-known for appearing on NBC's 'Saturday Night Live' from 2001, and most recently he took over from Jimmy Fallon (who moved to the 'Tonight Show') to host the late-late-night show.

Even though this is the first time Meyers will take the helm of the coveted award show, the former 'SNL' head writer is no stranger to the ceremony as he won an Emmy-Award back in 2011.

Seth will now follow in the footsteps of Neil Patrick Harris, Jimmy Kimmel, Jane Lynch and Ryan Seacrest, plus many more.

MORE: Is Seth Meyers The Right Man For This Year's Emmy Awards?

Meyers also received a second honor on Thursday, he was named in Time magazine's 100 most influential people in the world list.

Seth Meyers Arriving At The SNL After Party