Seth Rogen Gets Everyone Excited With 'Pineapple Express 2' Trailer (Video) 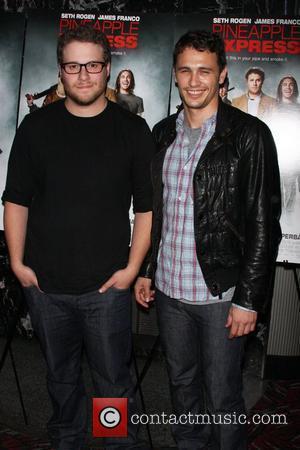 Seth Rogen and his pals James Franco and Danny McBride had everyone fooled over the weekend with a new trailer for 'Pineapple Express 2' - a sort of fake viral marketing campaigning for new film 'This Is The End.' Of course, the sequel was an April Fool's joke, though the second movie is very much real.

Stoner comedy Pineapple Express was a hit for Rogen, Franco and director David Gordon in the summer 2008, famously using M.I.A's track Paper Planes in the trailer. The song features in the fake sequel trailer, which sees the famous pair tasked with assassinating Woody Harrelson, or else! Jonah Hill also makes an appearance, noting, "Weed is for the people, it's the people's weed," while looking, well, pretty relaxed.

It's all good fun, though Rogen has the serious task of promoting 'This Is The End,' his new post-apocalyptic movie co-written with Superbad's Evan Goldberg. "We thought it'd be funny to see really famous people die in super graphic ways," Rogen said of the film at WonderCon this weekend "People were into it. At first we thought they'd be insulted or something like that - and some of them were - but most of them weren't. They were into it."

The movie, which sees the likes of Paul Rudd, Jason Segel and Emma Watson playing themselves, hits theaters on June 14, 2013. We're still waiting for confirmation on Pineapple Express 2.