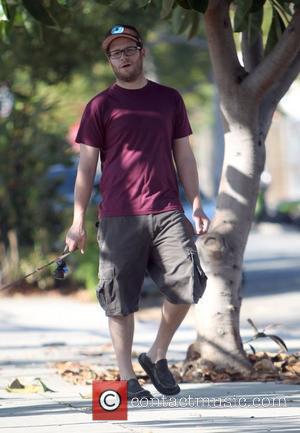 Actor Seth Rogen's romantic proposal plans turned into a nightmare when he realised his actress girlfriend was topless as he nervously fumbled with her engagement ring.
The Knocked Up star asked Lauren Miller to marry him in September (10) and admits he had no idea how stressful the magic moment would be.
He recalls, "When I got the ring, it was so nerve-wracking, it was like someone gave me a truck load of heroin to hold onto... I felt like the Feds (federal agents) were gonna kick in my door at any moment.
"I couldn't have a conversation with my girlfriend; all I could think about was this ring.
"I had all these plans... but literally the second I got it I walked right upstairs to where she was to propose to her, but she was in our closet changing, and she was literally only in her underpants and her boobs were out.
"I had already kinda started, and I was like, 'Oh man, her boobs are out. That's not part of the plan!'
"And I know she didn't picture it like this; no little girl is like, 'It'll happen in a closet with my t**ties out'.
"I figured the only appropriate thing was to place the ring on her nipple."