Shailene Woodley Had An Evening To Remember At The 2015 Mtv Movie Awards On Sunday (12apr15) When The Prizegiving Became A Tribute Night To Her. 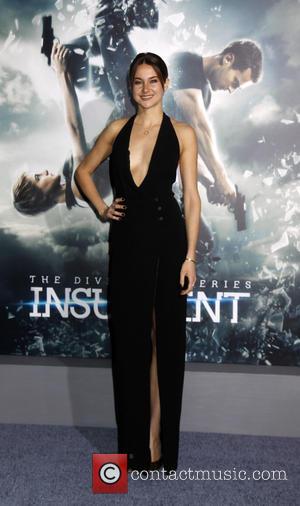 The Divergent star not only picked up the Trailblazer Award and the Best Female Performance, Movie of the Year and Best Kiss trophies for The Fault in Our Stars, but she also had celebrities heap praise on her.

Handing her the Trailblazer honour, pal and co-star Miles Teller recalled meeting the actress for the first time four years ago, stating, "We met for coffee; Shailene brought her own mason jar full of water, which she hiked to, like, a spring several miles to get."

He added, "I honestly can say I've never been in a room with somebody who emits more of a radiant, positive light. Shailene is an incredible force of nature."

Later, after she collected the night's Best Kiss award - joking that locking lips with The Fault in Our Stars love interest and Divergent sibling Ansel Elgort was like kissing "your brother" and "kinda great", model and actress Cara Delevingne said, "Shailene is doing so well tonight... She's amazing."

MOVIE OF THE YEAR

The Fault in Our Stars

Shailene Woodley – The Fault in Our Stars

Jennifer Lopez – The Boy Next Door

Dylan O’Brien vs Will Poulter – The Maze Runner

Ansel Elgort and Shailene Woodley – The Fault in Our Stars

Meryl Streep – Into the Woods