Shakira's new single, 'Can't Remember To Forget You', featuring Rihanna, is the most anticipated track of this very young year and is expected to be released next week (Jan 13th). 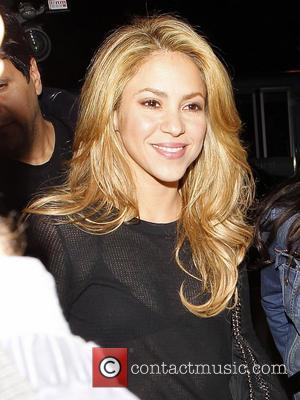 Two of pop-music's biggest female stars have joined forces on the track 'Cant Remember To Forget You'.

Rihanna and Shakira's collaboration has got the music industry buzzing, so hopefully the single will exceed the hype.

The Barbados hottie confirmed this new partnership by posting a photo via her Instagram page.

Each singer's name was on the back of a director's chair, along with the title of the song and the date of its release, which is the 13th January 2013.

"One. Week. Countdown." the 'Diamonds' singer wrote with the snap.

Chatter began of RiRi working with Shakira when Pitbull spoke of his latest single 'Timber'. The Miami-born hip-hop star revealed he wanted Rihanna to sing the hook for the track, which Ke$ha ended up doing.

"That is an ironic situation there. The person we were looking at first to work on that record was actually Rihanna, and Rihanna had something she had to do with Shakira, so she wasn't able to work on our record," he said to a radio station last month (Dec 2013).

'Can't Remember To Forget You' will feature on Shakira's upcoming album, which will be her first English-speaking studio set since 2009's 'She Wolf', and is slated for a release this coming spring.

Rihanna is becoming a big name to feature on other artists tracks, with her latest collaboration coming on rapper Eminem's single 'The Monster,' it landed at the No.1 spot on the Billboard Hot 100 chart for the fourth week.

Hopefully she will be as fortunate for Shakira.