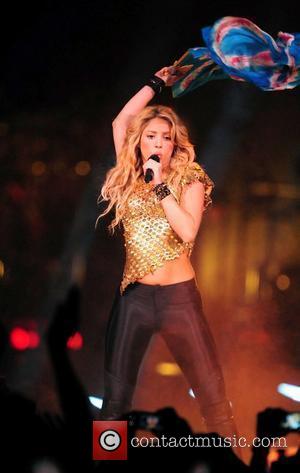 Latino pop superstar Shakira fears she's facing a hefty fine when she returns to her adopted Barcelona, Spain - for shooting a video without a filming permit.
The sexy singer took to the streets of the historic city on rollerskates to shoot her new video Loco after abandoning her first attempt to make the promo.
The hip-shaking Colombian pin-up was unhappy with director Jaume de Laiguana's initial treatment and persuaded him to follow her around Barcelona, trying to avoid mobs of fans.
She says, "It was so fun... Two days before we shot this video, we had a completely different plan - we were gonna do a black and white video in a studio and I wasn't feeling really comfortable with it.
"I just said, 'Let's just go out to the streets... and just shoot all day long and whatever happens happens.'
"We had no permits to shoot this video whatsoever... and I ended up jumping in a public fountain and riding a bike with a complete stranger without a helmet, so I'm probably gonna get fined when I get back to Barcelona."
But she insists it will be worth it for the fun she had with fans in the city: "It was the best experience in my life... I think music is about spontaneity and I refuse to lose that aspect of my life."