Review of Synthesizers in Space Album by Shawn Lee

What Shawn Lee's career has lacked in terms of actual sales is certainly made up for in terms of output; recording since the late 1980's, his official releases are piling up towards 30, although for Synthesisers In Space he's dropped the Ping Pong Orchestra handle which he's used has to accompany all of his most recent. 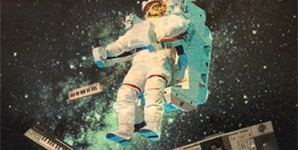 Lee's lack of profile and DIY aesthetic on this evidence certainly allows him to indulge his creative whimsy, as the majority of his latest work piles up around a weird sixties vibe that sounds a bit like Green Onions filtered through the BBC Sound Affects library. All this comes apparently following his discovery of an instrument he enigmatically calls "The mystery box", a piece of hardware discovered in a second hand music store that's presumably located somewhere in The Twilight Zone.

If all this screams "Acquired taste" to you then that's probably true, but Saturn Day Night at least I breaks any cycle by sounding like T-Rex if it were beamed from somewhere just past Mars. The rest lingers on a tip something like the weirder brother of The Beastie Boys The In Sounds From Way Out, especially the gloriously daft weebling of Lost In The Shuffle and it's hip hip-hop cousin Celestial Waltz. There's plenty of evidence that Lee is playing this with a not quite straight bat then, but when he wants to make some serious headway on the dance floor it really works too, as the monkey-funk of Heads Up reminds the listener that cool doesn't always come in airbrushed packages. Synthesisers In Space is only an orthodox listen if you spend your life tinkering with ancient Moogs and wishing that John Pertwee was still doing Doctor Who, but hey, I like watching re-runs of Tomorrow's People on YouTube as much as the next Joe, and give me this over 90% of the garbage which litters charts any day.