She & Him Quick Links She & Him (Formed 2006)
She & Him are an American Indie duo of actress Zooey Deschanel and M.Ward. They are better known for their singles "Why Do You Let Me Stay Here" and the Christmas single, "The Christmas Waltz".
Deschanel plays vocals, piano, and ukulele, and M.Ward plays guitar, and handles production.

Formation: Whilst filming a starring role in 'The Go-Getter", Zooey Deschanel met M.Ward on set.
Director, Martin Hynes, wanted the pair to sing a duet together in which he would use for the ending credits of the film.
Together, they decided to sing "When I Get To The Border" by Richard and Linda Thompson.
They both bonded well due to their shared interest in records produced by George Martin and Phil Spector.
Deschanel sang on the film 'Elf', and Ward discovered that although she had no chosen a career in music, she wrote songs herself.
Admitting her shyness, Deschanel chose not to reveal her year's worth of home demos.
She later decided to send them to Ward, who went on to tell her he wanted to record some songs with her.
It was here that 'She & Him' was formed.

Music Career: LA had a huge influence on Deschanel's music, as she would take long drives along the coastline listening to Brian Wilson and 1970's classics.
Californian music also influenced Ward, although at the time he was contacting Deschanel, he was based in Portland, Oregon.
In December 2006 and February-March 2007, the pair recorded together in Portland.
All the original songs were written by Deschanel, except "Sweet Darlin'", which she co-wrote with Jason Schwartzman.
The album also included two cover songs, "You Really Got a Hold On Me" by Smokey Robinson, and "I Should Have Known Better" by John Lennon and Paul McCartney.
The duo's first album, "Volume One", was released on March 18th 2008, via Merge Records.
A year earlier, the band actually made their first public appearance as a group at the Sundance screening of 'The Go-Getter'.
Their album was declared as number 1 album of the year by Paste magazine.
In March 2008, She & Him performed at the South By Southwest festival.
They began touring in July and finished in August 2008.
Backup vocals were provided by Becky Stark, from the band 'Lavender Diamond'.
The bands second album, "Volume Two", was released on March 17th, 2010.
Again, Zooey Deschanel wrote 11 of the songs included on the album.
It also included covers of, "Ridin' In My Car" by NRBQ, and "Gonna Get Along Without You Now" by Patience and Prudence.
The duo toured again through the Summer of 2010.
They performed at numerous Festivals through USA including, South By Southwest, Coachella, Bonnaroo, Savannah, Sasquatch, Nateva, Verge, and LouFest.
As well as this, they toured Europe, visiting London, Madrid, Barcelona, Paris, Berlin, Amsterdam, and many more places.
Via Pitchfork.com, "A Very She & Him Christmas" was announced, in September 2011.
Under Merge Records, the 12 track Christmas album was released on October 24th 2011.
Amazon.com said that the album was in the top 3 best selling albums over Christmas.
On the announcement of their third album, "Volume 3", to be released on May 7th 2013, the duo toured again.
They travelled US and Canada, with supporting acts of Tilly and The Wall, Emmylou Harris, Camera Obscura, Rodney Cowell and The Chapin Sisters.
She & Him left Merge Records in June 2014, and instead joined Columbia Records.
Their 5th studio album, "Classics", was scheduled for release later in the year.
Deschanel and Ward were recording with Brian Wilson, in July, for his upcoming album.
Deschanel was a guest singer for his album 'No Pier Pressure'.

Christmas Album Of The Week: We're Still Enjoying A Very She & Him Christmas

Seeing as it's only one week until Christmas, we thought this week's album of the week could be a celebration of one of our favourite festive albums of all time: A Very She & Him Christmas. Released via Merge Records, this collection of remarkable covers has been a seasonal staple for almost ten years. A Very She & Him Christmas

She & Him are an indie duo composed of New Girl star Zooey Deschanel and folk genius M. Ward. While they do have a back catalogue of original songs, it's always been their covers of classics which have touched us the most; so it's no wonder we hold their first Christmas album to such high esteem.

Continue reading: Christmas Album Of The Week: We're Still Enjoying A Very She & Him Christmas By Steven Williams in Lifestyle / Showbiz on 05 January 2012

She & Him, A Very She & Him Christmas Album Review

By Ava Winters in Music Reviews on 21 November 2011

Nobody is a greater advocate of She & Him's sugar-sweet pop or lead singer Zooey Deschanel's distinctively effervescent vocals than I. Whilst their dreamy compositions provide the perfect backing to lazy summer days, this sound does not seem to transfer well to different seasons. Sadly, their festive offering 'A Very She & Him Christmas' leaves you feeling like you've cracked open the champers for your Christmas lunch, only to discover most of the fizz has gone. 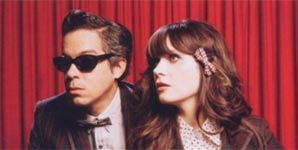 Continue reading: She & Him, A Very She & Him Christmas Album Review

Zooey Deschanel and M. Ward's band She & Him seem to be going from strength to strength since the release of their latest album Volume Two. The first single 'In The Sun' demonstrated the duo's playful song writing style and the new single 'Thieves' offers more of the same charming pop.

Continue: She & Him - Thieves

She and Him, Volume Two Album Review

Zooey Deschanel seems to live a pretty charmed life as far as I can see. The Indie Boy's Wet Dream™ is a successful actress with good looks, an indie musician husband and a talent that stretches to singing and songwriting as well. 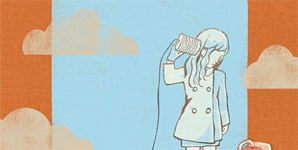 So despite the frequent blunders actors make into pop careers, She and Him seemed a golden project from the start. Anyone who saw the film Elf can attest to her honey-sweet voice, and her first full-length collaboration with M.Ward was praised for its deft take on sunny 70s Californian pop.

Volume Two is an apt title for the second LP because it picks up squarely where it left off. Clean sounding, lovelorn pop songs drenched in harmonies - songs made for sunny afternoons. No doubt that there will be some who criticize that they haven't reinvented the wheel here, but then that's sort of the point, isn't it?

The ability to create songs like this: nostalgic yet somehow timeless, warm yet not too saccharine is actually really hard to do right. But they do it, more than competently. What's more, some of the new songs seem to have taken on an air of confidence and they seem altogether more robust than those on Volume One. Highlights like 'Thieves' and 'Brand New Shoes' zing with cleverness, with Deschanel's rich vocals pouring over M.Ward's arrangements.

As someone who grew up surrounded by the songs of Fleetwood Mac, Linda Ronstadt and Jackson Browne - it's nice to see someone celebrate the joy of a genre which has in some respects, fallen out of fashion in modern music. As a pairing, the best aspects of She and Him now shine through, making Volume 2 joyful, sad, sweet and irresistible all at once.

She & Him will release In The Sun [featuring vocals from Tilly and the Wall] as a digital download single on March 29th 2010, there will also be a limited edition 7" available from independent record shops as part of Record Store day. The single will be backed by a cover of the Beach Boy 'I Can Hear Music' which was originally performed by The Ronettes. The video for the track was directed by Peyton Reed (Yes Man and Bring It On)

She & Him Quick Links

She And Him - Teach Me Tonight Audio Video

She And Him - Would You Like To Take a Walk? [Audio] Video

She & Him - Unchained Melody ft. The Chapin Sisters Audio Video