The band's single 'Geronimo' became an instant number one hit.

Sheppard might be yet to gain significant attention in the US and UK, but they're becoming serious superstars in their home nation of Australia. The Brisbane six-piece shot to number one with their multi-Platinum single 'Geronimo' last year, and even managed to knock down Pharrell Williams' record-breaking hit 'Happy'. Needless to say, the band were, indeed, very happy when they discovered that they had beaten the pop giant to the top of the chart in Australia, and even more so when their independent debut album 'Bombs Away' reached number two. They remain, however, contrite that Pharrell's opportunity to break yet another record was snatched from him. 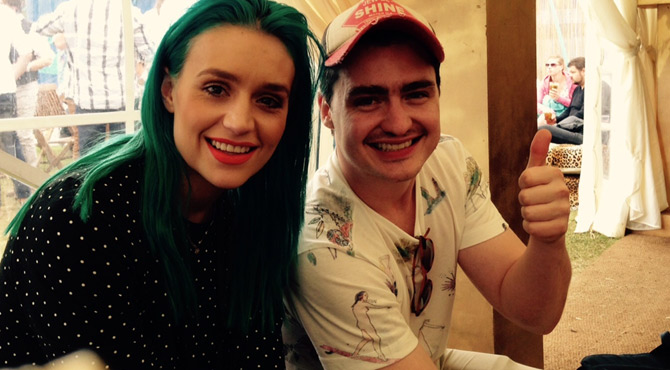 Australian indie-pop band Sheppard may not be on your radar yet, but they're about to be. The six-piece outfit released debut album 'Bombs Away' in their home country a year ago. Hit single 'Geronimo' went on to 5x Platinum sales in Australia, knocking Pharrell Williams' 'Happy' off the top of the charts in the process. The song has already clocked up over 3 million Spotify plays here in the UK. Now, as the band roll out 'Bombs Away' to a European audience, they're hitting the festival circuit. Contactmusic caught up with singers George and Amy Sheppard following their recent afternoon performance in the Big Top at the Isle of Wight Festival.

Contactmusic: Congratulations on the last year, it's been quite a rollercoaster for you. For those readers who may not know much about the band how would you describe Sheppard? In a word I'd say versatile.
Amy Sheppard: I'd say eclectic, energetic.

CM: The album came out in Australia a year ago, you've then been preparing for it to be released internationally. What have the highs and lows of the last twelve months been?
George Sheppard: The fact that the record has been out of sync. We started in Australia and because it did what it did over there, it's branched out into the rest of the world. We've got to do the whole cycle over again. Most bands would have everything in sync, you sign to a record label and release material worldwide. We've had to do three or four whole sets of promo, which was a bit of a drag, but the fact that we have done that and that the record is worldwide at the moment is bigger than what we dreamed was possible with this whole band. We started as a university assignment. Amy wanted to be a musician from an early age, but we really didn't expect anything huge to happen. That it has, is a dream come true.

Named after the three siblings who make up half of the band, Sheppard broke through in their Australian homeland last year, with their success including a three week chart-topping run for their second single.  Seeking to expand to other markets, they are currently in North America before a London show on March 23rd.  They'll also be back to the UK for a slot at the Isle of Wight festival in the Summer. 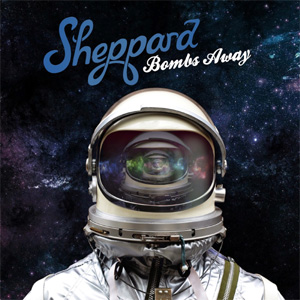 With song-writing duties shared by three members, an array of styles are evident on what can accurately be described as a pop music record.  Leading off is the hooks-aplenty 'Geronimo', on which both lead vocalists George and Amy Sheppard get to shine. You can sing along within the first listen and would expect it to annoy by the second, yet this is never the case - it is a bona fide indie-pop gem. If this was to continue, then 'Bombs Away' would be a classic release, so it is almost inevitable that the quality tails off - but not dramatically. The sextet clearly has nous for catchy melodies and sweet harmonies, best demonstrated on 'Let Me Down Easy' and 'Smile', while the breezy 'These People' is also pleasant. Moves into other genres aren't quite as successful; 'Grade A Playa' is ineffective synthpop, though does show the power of Amy Sheppard's voice.  Despite sounding familiar, 'Halfway To Hell' isn't the most impressive venture into heavier territory, but 'Find Someone' proves a decent stab at glam-rock.

By opening this album with such a strong track, Sheppard, to a degree, shoot themselves in the foot.  The wait for an equal doesn't end unless you play the record again, but at the same time the majority of bands will not write a 'Geronimo' during their lifespan. As well as writing a brilliant song, this young outfit are encouraging in that there are plenty of tracks here that are, at least, listenable and, in many cases, very good.  With a touch of focus on what they do best, there is enough evidence to suggest that they could be the next big thing from the Australian music scene.