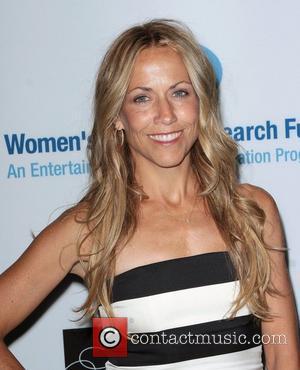 Sheryl Crow provided a rousing set for the final day of this year's Stagecoach Country Music Festival, last night (April 29, 2012). The 50 year old singer-songwriter proved that the festival's fans are open to a bit of country/rock/pop crossover, as she belted out her hits, like 'All I Wanna Do Is have Some Fun' and 'My Favourite Mistake'. Crow is reportedly planning her own country music album and is a resident of the Country Music capital, Nashville. Fans of the genre took her to their hearts last night, as she got them "amped and ready" for the night's headliner Brad Paisley.
The Los Angeles Times reports that Crow acknowledged her gratitude of being included on the country-centric bill and told the crowd "it's such an honor to be here. I've got a lot of nerve following Martina McBride." Brad Paisley joined Sheryl on stage, playing guitar on 'Real Gone,' showing support for the woman whose album he has also been helping out with, as well. She drew a decent crowd, considering she was competing with Kenny Rogers over on the other stage. And, according to L.A. Times, her set "unleashed the weekend's biggest impromptu group line dance session drawing in a couple of hundred fans near the stage."
Blake Shelton capitalized on his newfound fame from judging on 'The Voice' and performed a powerful set, playing immediately before his wife, Miranda Lambert. He might be used to critiquing the work of others right now but luckily for him, the L.A. Times have reviewed his own performance in a positive light, describing him as "a delightful loose cannon in an over-scripted world."