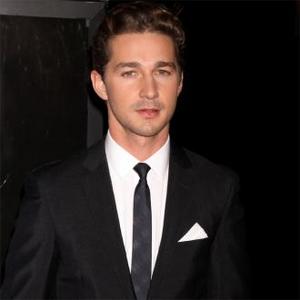 In the graphic music video, 'FjÃ¶gur PÃ­anÃ³', the 'Transformers' actor is fully nude alongside a naked blonde woman - dancer Deena Thomsen - but the promo's director Alma Har'el revealed the nudity was not planned, it simply happened spontaneously during the five-day shoot.

Alma told the Wall Street Journal: ''That's the difference between working within a corporate system and something that artistically takes you places you wouldn't expect.

At one point in the eight-and-a-half minute video - which is choreographed by Ryan Heffington - the pair stand opposite each other fully naked as they face each other's demons with the melodic track playing in the background.

The clip features Shia playing with a dead butterfly and kissing it and he grabs Deena's breast and rubs it with a dirty cloth after she has unravelled dirty bandages from his knuckles.

Speaking about the video, Sigur Ros said in a statement: ''We don't want to tell anyone how to feel and what to take from it. With the films, we have literally no idea what the directors are going to come back with.''

The Icelandic band have given filmmakers the creative freedom to do ''whatever comes into their head'' when they listen to songs from their sixth studio album 'Valtari'.

Alma's clip is the third in the series and another film from is scheduled to appear on the group's website on July 2.