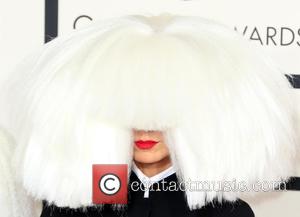 Picture: Sia - A variety of stars from the music industry all turned out in style to attend the 57th Annual Grammy Awards in Los Angeles,...

Australian singer/songwriter Sia is tempted to break her no-touring policy as she is receiving increasingly lucrative offers to perform live.

The notoriously camera-shy star, whose full name is Sia Furler, announced in 2012 she was renouncing fame and would no longer tour or promote her music.

Since the Chandelier star distanced herself from the spotlight, she has performed with a brown paper bag on her head, with her back to the audience or with hair covering her face.

However, the financial lure of touring has now caught Furler's attention.

She tells NME magazine, "I'm seeing some crazy numbers. When they keep coming I'm like, 'Is it worth it now?' because it could mean that I don't ever have to do anything again. I don't care about doing it so I'll throw the most ludicrous idea out and say 'I'll do a live show if you can get Olivia Newton-John to perform with me', because that's my childhood dream. I'm working out ways to make it fun. I guess there's a number, if I'm worth that number then I'll go out on tour."