Sienna Miller and her partner Tom Sturridge have become parents for the first time after the actress gave birth at the weekend. 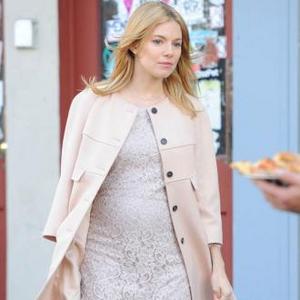 Sienna Miller has become a mother for the first time.

The 30-year-old actress and her fiance Tom Sturridge welcomed their child into the world over the weekend in London, a source has confirmed to Us Weekly magazine.

However, details on the baby's gender, name and weight have not yet been disclosed.

In May, the couple celebrated their child's imminent arrival with a baby shower in London.

The pair were seen leaving the patty with a friend, who carried Boxes which appeared to house cakes and balloons.

Sienna - who has been in a relationship with 'The Boat That Rocked' actor for just over a year - revealed earlier this year she had taken up yoga to help her relax during her pregnancy.

She said: ''I have been trying to do some pregnancy yoga as I'm definitely not a gym person.

''My mum started up one of the first yoga schools in London in the 70s, so I should probably use her expertise as I have really bad posture. But I think I'd probably kill her if she tried to tell me to sit up straight.''