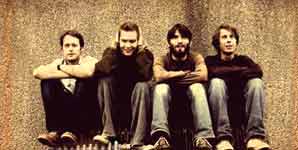 It should have been a happening. The flock had strolled for miles to hear them preach, the world, it's wife and their scenester daughter were all here. Here to see Sigur Ros wrest with their mantle as kings of the beauteous and courteous crescendo. Here to be immersed in imagery evocatively provoked through the medium of foreigneity- in sound, in voice, in vision and in sheer magnanimous scope- all in a grandiose Victorian theatre. It was really going to be quite the thing.

But then it kind of wasn't. Trust me I've fought myself hard to not say this, after all it's Sigur flaming Ros, one of the most majestically beautiful bands of their generation, but I left wanting more. Much more. True the use of screen projection, lighting and visuals truly brought to life the glorious opening of 'Glosoli' and the crescendoes when they were reached were at the overwhelming end of special, butthe in between days merely left me hungry for more spectacle. Instead I was presented with a quite particular 'how to' kit detailing the making of the Sigur Ros sound- the movement between instruments- traditional, digital and improvised- noted a clinical edge to the band which is absent from the arable sublimity of their music. It was all just too perfect and detached.

Now Sigur Ros hardly make singalong hits, yet some of their songs, to me at least capture their essence better than others. Thus I felt frustrated when those songs from recent offering 'Takk' which I switch off to while listening were preferred to the notable brilliance of 'Staralfur' and 'Svefn-g-Englar' from the album 'Agaetis Byrjun'. One song in particular needed the crossing of a stage of a marching brass band to re-acquire my attention and I stood there thinking 'this is Sigur flaming Ros, they shouldn't need this...'

Nor should they acquire fans who wolf-whistle, shout for certain songs or collapse right next to me having taken too many drugs. I walked away from the venue into a torrent of freezing rain whose clouds mirrored my sullen disappointment. I could have stayed at home and listened to Takk on my own- I didn't really need to share this experience with 4,000 blood hungry revellers in a beautiful theatre whose cavernous interior and baying crowd stole away it's soul-they all left having witnessed something special which I hadn't partaken in. I left crestfallen and mired in 'if onlys...'