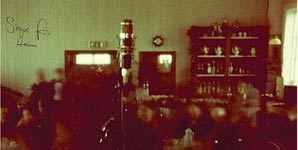 Sigur Ros's first album for 2 years is a bit of strange one; released to accompany the Heima DVD, it's not a soundtrack (there is little correlation between the songs on the CD and those on the DVD), yet neither a straight studio album. Instead it's half rarities and previously unreleased tracks, and half live acoustic versions of previously released songs. Intriguingly the title track from 1997's Von is represented on both sides, allowing listeners to compare the two renditions (more of which later).

It's all impossibly pretty of course; the band's unswerving understanding of dynamics and emotional subtleties makes for an enthralling listen, and all the more so when considering the first set here is comprised mainly of tracks previously discarded over the course of the band's career. Opener 'Salka' is a case in point; left on the mixing room floor during recording for ( ), it's actually a better track than some that made it onto the album, with a hypnotic nursery-rhyme guitar figure counterpointed by glockenspiel and the whole thing pulsing gently in a dignified stately rhythm. 'Hjómalind' on the other hand is as close to mainstream rock as the band have ventured thus far; what starts off suggesting a companion piece to Takk's 'Glósóli' throws in an unashamed anthemic hook of a chorus which possibly owes more to Doves or Elbow than any of the usual post-rock suspects. The band have disowned the track to a certain extent, which makes its appearance on the disc even more surprising - luckily it's a welcome addition to their canon. The pick 'n' mix nature of these rarities is further enhanced by the Brothers Grimm-scored-by-Tim Burton-melodrama of I gær, with an unsettling music-box intro bludgeoned away after a minute with brute noise. 'Hafsol' takes its time over ten minutes, the unexpected sound of a drumstick tapped against Georg Holm's bass strings providing a percussive groove for more trademark etherial guitar before a startling change of pace at the seven-minute mark over which a tin whistle calls a emphatic tattoo. The climax is cathartic in its explosive power, while the aftermath conveys a sense of post-orgasmic breathing slowly returning to normal levels. Heady stuff indeed.

The live acoustic numbers are, happily, no less essential, with harmonium and extra strings filling in for the band's signature bowed guitar in places and various ambient chitterings - bird calls, wind and water - audible in the background during quieter moments. 'Starálfur''s palindromic piano remains a thing of easy wonder, while 'Agaetis Byrjun' - the version here is one of the few also represented on Heima - benefits from a more muscular treatment than its polite studio sister, with deep-toned acoustic guitar over what sounds akin to a school piano. 'Heysátan' is chilly nautical brass band loveliness, the sound of horns melding with those bird calls to cast up freezing grey skies drooping over a northern harbour for an album highlight. Less effective is 'Samskeyti', slowly unwinding its mathematical patterns to nowhere in particular for a gentle five minutes. ( )'s opener 'Vaka' fares better as the harmonium adds a restrained spiritual quality over which xylophones plunk in syncopatic splendour. As for 'Von', the electric rendition clocks in at a minute longer and is, expectedly, significantly louder, yet the result is a less charming recording than its slighter sibling despite Jonsi's vocals occasionally finding themselves too high in the latter's mix.

Overall then, this is a collection which deserves a wider audience than die hard fans; the rarities are of a strong enough calibre to rank alongside much of the band's best work, and the bonus of some sympathetic reworkings ensures that the second set is more than just filler. Just don't call it 'glacial'.