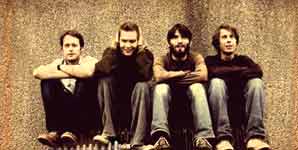 'HoppÃ­polla', taken from Sigur RÃ³s's most highly acclaimed album to date, 'Takk…', is to be re-released on May 1st. It has been inescapable to notice that 'HoppÃ­polla' is currently being used on Richard Attenborough's Planet Earth on bbc. This high profile exposure has sparked an upsurge of interest from the general public.

'HoppÃ­polla' is hands down the most commercial thing Sigur RÃ³s have ever recorded. At just over 4 minutes long, it is also the only song anything like radio programmable they've ever put their name to. Starting with a simple and pretty piano motif, 'HoppÃ­polla' proceeds to layer slightly warped backwards string loops with beautiful real 'forward' strings to slowly construct a feeling of awesome well-being, surging on a tide of pure psychedelic pop euphoria.

Singer Jon Thor Birgisson adopts a slightly lower register than his usual full-on falsetto, weaving an open and childlike sense of hope through multi-layers of carefully constructed vocals, while he sings (in Icelandic) about nosebleeds and jumping into puddles. As the song expands to a grand and dizzying climax, brass begins to fanfare and an orchestra swells and flourishes, while all about tinkly things twinkle brightly.

'MeÃ° BlÃ³Ã°nasir', one of the additional tracks here, is also featured on 'Takk…'. It sits beautifully on the LP as the tail end of 'HoppÃ­polla' and so works perfectly as part of this release. Originally recorded on the band's 1998 debut album 'Von', 'HafssÃ³l has taken on near mythic significance with the band's fans thanks to a magical live rendition that bears scant relation to the experimental original.

Sigur Ros with the Los Angeles...