By Alastair Thompson on 11 November 2010

Simon Amstell made his name on Channel 4's Popworld, creating an onscreen persona that married ironic surrealism with a razor sharp wit. His style was his own, as he quite obviously didn't give a shit about the stardom of guest whom he was interviewing, famously making Britney Spears cry. 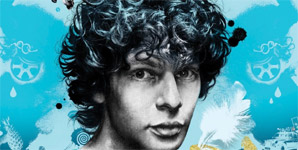 His move to 'Never Mind The Buzzcocks' as Mark Lamarr's replacement created a cult following. Guests would join the panels and ultimately end up looking like the Christmas puddings against his seemingly effortless cerebral putdowns. Preston and Lee Ryan's appearances were series highlights, the latter smiling like an idiot throughout whilst the former walked out much to Amstell's delight.

His stand up show 'Do Nothing,' which has recently been serialised in the BBC comedy show 'Grandma's House,' was written in 2008 and toured for much of the next year. It received mixed reviews as Amstell left his previous TV demeanour in the dressing room to tell a personal, philosophical tale, of wracking self-doubt and an inability to fit into seemingly normal situations.

'Do Nothing' was recorded earlier in the year to be released on DVD in time for Christmas and tonight's show was one of five designed to showcase that material in the relatively intimate setting of London's 100 Club. For all intensive purposes, it didn't.

The choice of support act, unfortunately, set the tone for the evening, as musical story-tellers Ginger and Black (she's ginger and he's black, no really) put the audience through their most uncomfortable thirty minutes since Bill Clinton denied sexual relations with 'that woman' in an international address. From script to delivery, they were awful.

Amstell's appearance on stage just before 9 was met with widespread relief that the evening was about to start afresh. Bounding on stage, the BAFTA-nominated comedian pointed to a poster displaying his DVD cover and announced "this will be me doing what I do on the DVD but now.'' As expected then, no new material, but for a show he has performed so many times this should be air tight.

He seemed very nervous from the off and launched into a tale of being lonely, only to buy a house and find two sinks in the bathroom. "I used both," he assures us, "one to wash and the other to cry in." At last, a laugh. It doesn't last. "I haven't done this show since the recording (apparently May this year) and I thought that would be it. Now I have to remember it."

What follows is quite embarrassing as he clearly doesn't remember it. His format is to tell a story that leads into another and so on. The problem is that he tells the stories as he remembers them; lurching back and forth between a tale about an actor he fell in love with and his views on religion. The material is intelligent, thoughtful and at times hysterical but the delivery is so bad that the punch lines get lost.

On only two occasions does his razor sharp wit take over as he suggests that half of the audience is only there because "the person sitting next to them really likes him." The other is when he berates a woman standing up to go the toilet with "where you going bitch?" Now seen in print, the fact that these two comments are highlights says everything about the gig.

Amstell talks of more lost love and concludes that "actual self awareness is the knowledge that you're playing a character in someone else's dream." With the suggestion that if you are shy (as he was / is) then you can walk away from the dream. Well, Amstell must've felt he was in someone else's nightmare tonight as he literally ran off stage to put an end to the show. Hopefully he is spending the afternoon learning his lines.

For anyone left wondering, the Popworld / Buzzcocks character of old has long since woken up.