Simon Cowell has given his two dogs Squiddly and Diddly a new friend to play with after new Yorkshire Terrier. 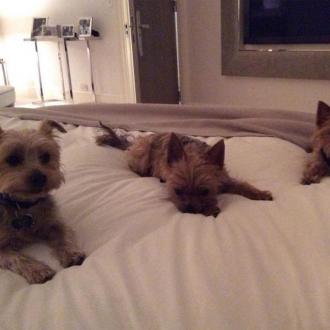 Simon Cowell has acquired another dog.

The music mogul took to his Twitter account to reveal he has given his two pet pooches Squiddly and Diddly another Yorkshire Terrier to play with, a four-legged friend called Freddy.

In a caption attached to a picture of his new addition and his other two canines lying down on his bed, he wrote: ''Squiddly and Diddly have a new friend. Meet Freddy.''

Simon - who has 11-month-old son Eric with partner Lauren Silverman - is known to be a big dog lover but recently vowed to ''rescue some kittens'' if he won an award for his judging work on talent shows 'The X Factor' and 'Britain's Got Talent'.

And despite trying to tempt fans to vote for him by tweeting on behalf of Squiddly and Diddly, he lost out to his 'BGT' colleague David Walliams at the National Television Awards (NTAs) in London last week.

Simon has been known to take Squiddly and Diddly to a number of showbiz events and he treated them to a holiday to Barbados over the festive period.

The pets looked to be having a whale of a time as they chilled out on a float which the 'X Factor' boss held onto in a swimming pool.

He also took them for a trip to the beach and shared a picture of the pooches looked pooped after their sand-filled fun.

He wrote: ''It's tough being so cute...Squiddly and Diddly after a long day on the beach. (sic)''