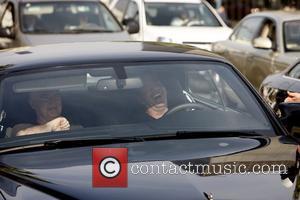 Picture: Simon Cowell is let off with a ticket as he is pulled over by a police office for not displaying a registration plate on his...

Reality TV supremo Simon Cowell has dropped his biggest hint yet that he could be set to leave The X Factor after admitting he sees new judge Cheryl Cole as his replacement.

Speaking to reporters, Cowell said he "hopes [Cheryl] can carry the show in the future"

A source close to the music mogul, who turns 50 this year, confirmed that Cowell believes now it the "perfect time" to hand over to new blood.

In her first year as an X Factor judge since replacing Sharon Osbourne, Cole appeared alongside Louis Walsh, Dannii Minogue and Cowell himself and took charge of the female under-25s category.

She mentored eventual winner Alexandra Burke, as well as one of the other most popular acts, angelic 17-year-old singer Diana Vickers.

Cowell's existing contract with ITV is up for renewal at the end of this year.

And many pundits have already speculated that he may seek to negotiate a behind-the-scenes deal that would allow him to drop out of the panel of judges.