Simon Cowell's Son Eric Stole The Spotlight From His Father During An Interview With Ex-girlfriend Terri Seymour. 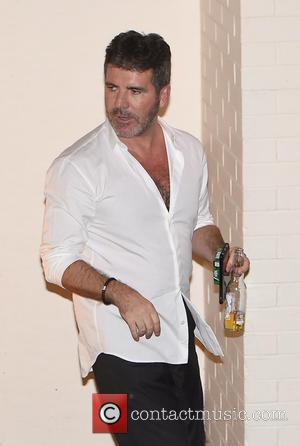 The music mogul sat down to be quizzed by Terri, with Simon replacing Howard Stern on America's Got Talent at the top of the agenda. However, the attention is soon diverted onto Eric, who toddles into shot with mother Lauren Silverman.

While desperately trying to show his busy father his new toy car, Eric walks in and out of the room while Simon laughs.

"Can you say Eric?" asks Terri, with the little boy replying with his name. "He has a British accent!" Simon exclaims, as they try to resume the interview.

Eric then teases Terri with his carrot sticks, and seems unfazed by the lights and cameras that surround his famous father.

"When he wants something, he's like me. He just says it over and and over again," Simon explains after Terri asks him if his son has inherited any of his mannerisms.

The X Factor judge then revealed that he's given One Direction's Louis Tomlinson advice about fatherhood, after it was revealed earlier this year that the singer is expecting a child with ex-girlfriend Briana Jungwirth.

Praising his son, he revealed he told Louis, "Look, if he's anything like Eric, you'll have a fantastic time."

Simon and Terri dated for six years before splitting in 2008.