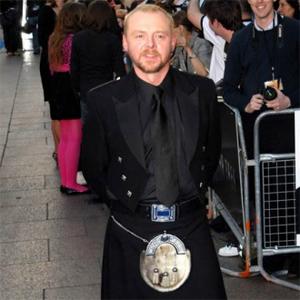 Simon Pegg once wrote a sexy poem for Sigourney Weaver.

Sigourney, 61, plays a "crackpot" woman in the film who claims to have witnessed an alien crash landing in the movie, and Simon admits they did not originally intend for the role to be played by a female.

He said: "We just gave her The Script. Initially it was a man and then we thought, 'Why don't we make it a woman?'

"We immediately thought, 'Why don't we ask Sigourney Weaver?' So we did what we normally do, we sent her the script, she read it and then we heard she had said yes."

Simon's co-star and self-professed sci-fi geek Nick Frost was amazed to have Sigourney in the film because he is such a huge fan of her in her role as Ripley in the 'Alien' movie series.

As well as Simon, Nick and Sigourney, other stars who attended the premiere included Coldplay singer Chris Martin - who is close friends with Simon - socialite Jerry Hall and actress Noomi Rapace.