Sir Paul McCartney has revealed he recreated the classic Beatles 'Abbey Road' album cover in a werewolf costume on Halloween. 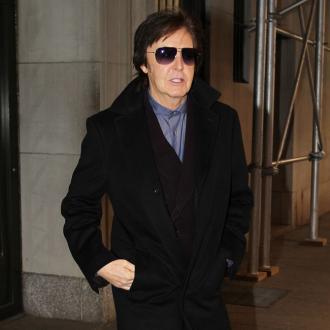 The 72-year-old musician passed by the world famous recording studio in London while returning home after a Halloween party in October and couldn't resist asking his wife NANCY SHEVELL to photograph him stood on the pedestrian crossing just like he and the rest of The Fab Four did for their classic 1969 LP.

And Paul boasts his monster mask was ''so brilliant it scared a couple'' of my grandkids''.

In an interview on BBC Radio 2, he revealed: ''There's no way you'd know it was me, and coming back from the party, we crossed the crossing and so I said, 'You've gotta stop.'

''So I did a picture of me in this werewolf outfit crossing the zebra crossing. Of course the guy who I was holding up was this taxi driver who was very annoyed with me, and I'm going, 'No, no you've gotta do it.' I'm positioning Nancy and saying, 'You've got to take it from there,' and so Nancy got it and she Instagrammed it to everyone.''

Paul still works at Abbey Road Studios and he admits that whenever he goes back to the studio The Beatles made famous he can't help but reminisce about his times there with John Lennon, George Harrison and Ringo Starr.

He said: ''For me, I start the tour, and whoever I'm with, I'm saying, 'Well OK now we [The Beatles] came here.' I just start on the stories and I bore everyone stiff every time.''