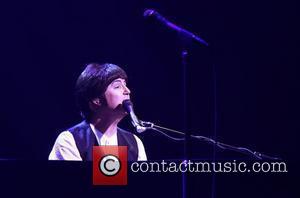 Picture: Joey Curatolo as Paul McCartney Opening night of the Broadway production of 'Rain - A Tribute to The Beatles' at the Neil Simon Theatre -...

Sir Paul McCartney thrilled stars including Alec Baldwin and Ronnie Wood with a two-hour hit-packed show in New York on Monday (13Dec10).
The former Beatle played an intimate concert at the legendary Apollo Theater, which was broadcast live on American radio channel Sirius XM.
It attracted a host of celebrities, including Baldwin and Wood, as well as Jerry Seinfeld, Martha Stewart and Tony Bennett.
MCCartney sang 27 songs during the set and he admits he was honoured to play at the iconic venue.
He told the audience, "I know it's special to you New Yorkers. To us British boys, it's really special."
The star also paid tribute to his late Beatles bandmate John Lennon, performing the band's track A Day in the Life and his anti-war anthem Give Peace a Chance, just days after the 30th anniversary of the legend's death.
MCCartney also added a festive feel to the gig, welcoming a local choir to the stage to perform his holiday hit Wonderful Christmastime.