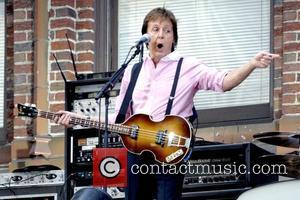 Picture: Paul McCartney performing live on the marquee of the Ed Sullivan Theater for CBS's 'Late Show with David Letterman.' McCartney is performing for the first...

Sir Paul McCartney is still laughing off reports he died and was replaced in THE Beatles by a lookalike - 40 years after the rumours first surfaced.
The Fab Four were photographed walking along a pedestrian crossing on the legendary cover of their 1969 album Abbey Road.
MCCartney's barefoot appearance in the photo sparked wild rumours the rocker had died in a car crash - and the 67 year old admits he still has to reassure some fans he's not an impostor.
He explains, "The idea was to walk across the crossing, and I showed up that day with sandals, flip-flops. It was so hot that I kicked them off and walked across barefooted, and this started some rumour that because he's barefooted, he's dead. I couldn't see the connection.
"I just laughed. I knew (it was) because of the fame and the craziness... But it was a bit strange, because people started to look at me like, 'Is it really him or a very good double?' No, this is him!"