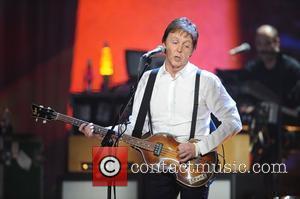 The guitar pop legend Sir Paul McCartney learned to play on has fetched $600,000 (GBP330,000) at an auction at London's Abbey Road Studios. The instrument was sold by the former BEATLE's school friend IAN JAMES for three times its estimate. MCCartney used the Rex acoustic guitar - which belonged to James - to learn his first chords. He also used it to audition for John Lennon's The Quarrymen, the band the pair played in before The Beatles. MCCartney provided a letter of authenticity for the guitar, which reads, "The above guitar, belonging to my old school pal Ian James, was the first guitar I ever held. It was also the guitar on which I learned my first chords in his house at 43 Elswich Street, Liverpool 8." The buyer was American CRAIG JACKSON, the president of an auction company, who says, "This is such an important piece of rock history and I am an extremely happy man tonight. Without this guitar The Beatles may never have existed and it is a fantastic acquisition."