Sir Paul McCartney paid tribute to Elvis Presley when he visited the grave of the late musician over the weekend. 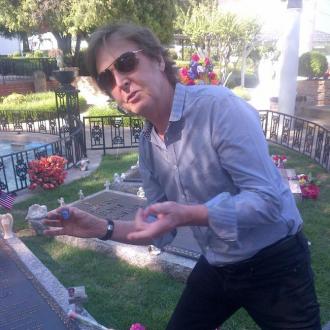 The Beatles legend toured Graceland mansion before stopping by the final resting place of the late musician and leaving one of his own guitar picks so ''Elvis can play in heaven''.

Paul - who tweeted a picture of himself at the grave - was in the Southeastern US state of Tennessee for the latest gig on the North American leg of his 'Out There' tour when he decided to make the trip to Elvis' former home.

Recently John Lennon's widow Yoko Ono praised Paul as ''sweet'' for insisting she ''could not be blamed for anything'' to do with The Beatles' split in 1970.

Yoko - who met John in 1966 while he was still married to first wife Cynthia, before tying the knot with him in 1969 - said: ''Yes, I think [Paul] was sweet to say that [I wasn't to blame] and probably he needed courage to say it. That's why he couldn't say it until now.''

Paul previously insisted John - who was assassinated in 1980 by a crazed fan - was ''definitely going to leave the band in 1970''.