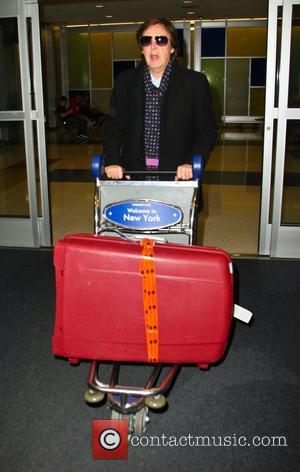 Picture: Paul McCartney pushes his own luggage after arriving on a flight at JFK Airport New York City, USA - 20.10.12

Sir Paul McCartney is the latest name to join those who are recording a special festive single in aid of the parents of the Hillsborough victims. 96 people died in 1989 when too many people were allowed into the Liverpool end of a Liverpool versus Nottingham Forest soccer match and, whilst for years the fans were given blame by the police, the parents of the deceased have spent almost quarter of a century fighting to exonerate them of blame.

With a report earlier this year agreeing with the families, they’re now hoping for a fresh inquiry into who was to blame for the tragic events, and the single release will seek to raise money for their past and future legal costs. McCartney joins an ensemble that already includes Robbie Williams and Liverpool folk-hero Gerry Marsden from Gerry & The Pacemakers.

Speaking to the BBC, one of the parents of the deceased, Margaret Aspinall, said "When I was listening to it, to be honest with you, it was sad because I just shut my eyes and I saw my son handing me the record. I thought, maybe he's handing me this new version and saying 'listen to this'." Aspinall also praised McCartney for joining the cause, explaining "He decided to do it and I think that's lovely because he's from Liverpool, he knows how Liverpool people work and he understands us.” The song – a cover of The Hollies ‘He Ain’t Heavy, He’s My Brother’ – is widely tipped by the bookies to beat out the eventual winner of this year’s X Factor to take the Christmas No. 1.