Sir Paul McCartney played The Beatles song 'Another Girl' for the first time at Japan's Nippon Budokan - 49 years since The Fab Four last played at the venue. 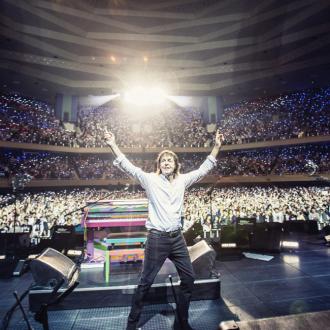 Sir Paul McCartney treated Japanese fans to the first ever performance of The Beatles' song 'Another Girl' on Tuesday night (28.04.15).

Bringing his 'Out There' tour to the venue he made history in front of 10,000 fans to witness his version of the song that Ringo Starr, George Harrison and John Lennon had never played live before.

Speaking before the gig, he said: ''It's very exciting to be returning to the Budokan because it is a very special place and was the first place we played in Japan. There was a lot of controversy at the time but I now know that it is a regular venue for a lot of people. But for me it has a very special place in my memory.''

Sir Paul described the concert as ''thrilling'', he said: ''It was sensational and quite emotional remembering the first time and then experiencing this fantastic audience tonight. It was thrilling for us and we think it was probably the best show we did in Japan and it was great to be doing the Budokan 49 years later. It was crazy. We loved it.''

The 'Four Five Seconds' guitarist played a set of 28 songs, comprised of Beatles tracks, from his solo career, Wings - who he formed with his former wife Linda.

Meanwhile, the 72-year-old star had another surprise up his sleeve, every person in the audience was given a light up wristband, that transformed the gig-goers into a massive Union Jack flag.