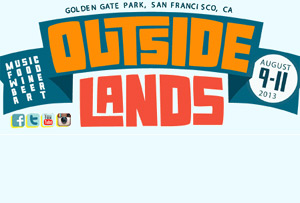 Another Planet Entertainment, Superfly Presents and Starr Hill presents, in a partnership with the San Francisco Recreation and Park Department, are very proud to announce the lineup for the sixth annual Outside Lands Music & Arts Festival. The world's only gourmet music festival that Rolling Stone called "one of America's best," will once again take place in San Francisco's historic Golden Gate Park August 9 - 11, 2013. Tickets will go on sale this Thursday April 18 at 12 noon PDT via www.sfoutsidelands.com. A significant portion of every ticket sold will directly benefit San Francisco's Recreation and Park Department.

In its five years, Outside Lands has risen to become one of the most revered and prominent festivals in the country. Year after year of consistently world-class live music combined with the unique beauty of its Golden Gate Park surroundings and the best food and drink found at any festival has elevated its reputation and cemented its position as a highly acclaimed global destination for entertainment lovers everywhere. The 2013 music lineup is once again purposefully dynamic and diverse. From Paul McCartney, Red Hot Chili Peppers, Nine Inch Nails and Phoenix to Kaskade, Vampire Weekend, Pretty Lights, Yeah Yeah Yeahs, D'Angelo and The National to Grizzly Bear, Daryl Hall & John Oates, Young The Giant and Band Of Horses to the quickly rising The Head and the Heart, Yeasayer, Foals, Dawes, Trombone Shorty & Orleans Avenue, Youth Lagoon, Gary Clark Jr., Kurt Vile and the Violators, Zedd, Smith Westerns, Twenty One Pilots, Daughter, Dillon Francis, The Lone Bellow and The Men, to local Bay Area artists The Mother Hips, Thao & The Get Down Stay Down, Camper Van Beethoven, The Soft White Sixties, Midi Matilda, Bhi Bhiman, Locura and The Easy Leaves and so much more, Outside Lands 2013 has developed into a vortex of music discovery, exposing fans to legendary artists, current favorites as well as on-the-verge breaking acts. The complete lineup is below.

Taking its reputation as the world's only gourmet music festival seriously, Outside Lands will once again expand on its food and drink options in 2013. Last year, the festival offered a record-breaking total of over 200 menu items, and introduced Beer Lands with over 30 California craft brews, and Outside Lambs, devoted to the deliciousness of the lamb. So dynamic was the culinary experience that Rolling Stone proclaimed, "at Outside Lands food and wine are half the fun." The Outside Lands food and drink lineup is forthcoming later this Spring.

Now in its sixth year, the Outside Lands Music & Arts Festival has become a cherished event that the city of San Francisco has embraced as fans from across the country flock to spend an incomparable weekend in one of America's greatest parks. Each year, festival organizers ensure that every facet of the event highlights the Bay Area and all of the components that make it one of the most desirable places to live and visit. They also like to the say thank you to the city and the local communities surrounding the park by giving back in substantial ways. In its first five years, Outside Lands has raised over $6 million for the benefit of the San Francisco Recreation and Park Department. A 2011 economic study reported that the festival generates over $60 million annually to the San Francisco economy.

Confirmed Outside Lands 2013 lineup is below: