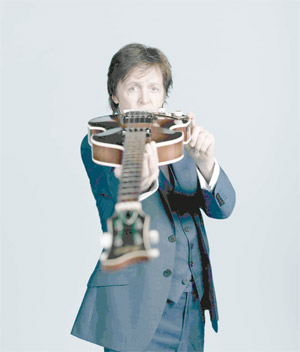 Saturday 28th September saw HMV open its doors to the public once again at its original home of 363 Oxford Street, London. The store originally opened in 1921 before shutting it's doors in 2000.

To celebrate their return, HMV are delighted to announce a major coup.  Returning to the store where The Beatles cut the demo disc that led to them meeting George Martin and signing with EMI, Paul McCartney will sign copies of his brand NEW album in store on Friday 18thOctober.

McCartney's album, NEW, is his first collection of solo brand new compositions in six years.  For this album he teamed up with producers Giles Martin, Paul Epworth, Mark Ronson and Ethan Johns.

Part of the fabric of British music and synonymous with music retail in this country, 363's importance was formally recognized in 2000, when Sir George Martin unveiled a blue plaque outside the store reading '363 Oxford Street - The World's Most Famous Music Store'.

HMV's Chairman, Paul McGowan, commented: "We're truly honoured to welcome Paul McCartney back to HMV 363 Oxford Street. It sends a clear signal across the world that HMV is truly back in its rightful place as the home of entertainment."

The event at 363 Oxford Street forms the centrepiece of a programme of over 100 in store events across HMV's stores in the UK, Ireland and Canada throughout October and November that has already seen acts including Drake, Vamps, Lucy Spraggan come face to face with their fans in the way that only HMV can deliver.