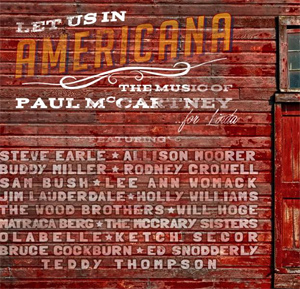 On June 25, 2013 Reviver Records will release Let Us In Americana,its second album from the Let Us In series, which follows the success of 2011's Let Us In Nashville.

Let Us In Americana features prolific Americana artists including Steve Earle, The Wood Brothers, Buddy Miller, LEE ANN WOMACK, Will Hoge and many more delving into a rich selection of songs written by Sir Paul McCartney and John Lennon. Each artist chose a composition to record and the proceeds will go to the Women And Cancer Fund, established in the memory of Linda McCartney.

June 25th, the release day of Let Us In Americana, is a significant day in Beatles history. On that day in 1967, The Beatles performed "live" thanks to the BBC on the first global TV music special entitled, "Our World". It was viewed by over 400 million people spanning 26 countries and special guests during The Beatles performance included: Mick Jagger, Keith Richards, Eric Clapton and Graham Nash.

Fast forward to 2013, now 46 years later, with the release of Let Us In Americana. The 16 track album is distributed by BDG via RED Distribution and was primarily produced by Phil Madeira in Nashville.

Let Us In Americana Tracklisting:
The Wood Brothers - Come And Get It
Buddy Miller - Yellow Submarine
Will Hoge - Band On The Run
Jim Lauderdale - I'm Looking Through You
Holly Williams - My Love
Teddy Thompson - Let Me Roll It***
Bruce Cockburn - Fool On The Hill**
Ollabelle - Get Back**
Lee Ann Womack - Let 'Em In
Steve Earle & Allison Moorer - I Will***
Rodney Crowell - Every Night*
Matraca Berg - Yesterday
Ketch Secor - Give Ireland Back To The Irish
Sam Bush - I've Just Seen A Face
Ed Snodderly - Uncle Albert/Admiral Halsey
The McCrary Sisters (Amy Helm, Fiona McBain & Allison Moorer) - Let It B