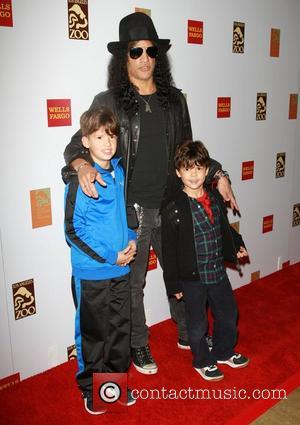 Slash and Duff Mckagan's rock supergroup Velvet Revolver is poised to make its comeback - the band is close to securing a new frontman, more than two years after Scott Weiland was ousted from the job.
The group has been without a lead vocalist since parting ways with Weiland in April 2008.
They revived efforts to find a replacement earlier this month (Dec10) and drummer Matt Sorum admits they have narrowed down the search - although he's hesitant to reveal the identity of the star until they've jammed together a little longer.
Speaking to The Pulse of Radio, Sorum reveals there's one singer they "really like a lot", but adds, "We can't make the announcement yet because we're 'dating', you know. We haven't consummated the relationship, we haven't sat down this gentleman and made the agreement together."
However, he insists the mystery vocalist is a "known guy", who he describes as "younger and stronger".
And he's urged fans to remain patient as they work out the finer details.
Sorum adds, "I know it's been like this long-winded, 'Oh, Velvet Revolver this, Velvet Revolver that.' We're tired of it, believe me. But we don't have the ability to just jump out there with any singer. We can't do it."