We don't know how something can be so down-to-earth and yet so profound, but Nottingham duo Sleaford Mods have certainly managed it with their latest single 'Mork n Mindy', featuring rising indie star Bill Nomates.

Shot in your basic dull council estate home, the video has been directed by none other than Ben Wheatley, who is probably best known for his work on 'Kill List', 'Sightseers' and 'High-Rise'. There's not much going on in the video, but for a song that's generally about frontman Jason Williamson's boring and uninspiring childhood, it's the perfect visual and still manages to be thoroughly unsettling.

"Mork n Mindy is the sound of the central heating and the dying smells of Sunday dinner in a house on an estate in 1982", the band mused. "Concrete, dinted garages, nicotine. Where beauty mainly exists in small cracks on the shell of your imagination."

It's the first song from the Nottingham electro-punk two-piece's forthcoming album 'Spare Ribs'; an exciting follow-up to 2019's 'Eton Alive' which reached number 9 in UK charts. This year they also dropped a universally acclaimed best-of compilation album entitled 'All That Glue'.

'Spare Ribs' will be released on January 15th 2021 via Rough Trade Records. 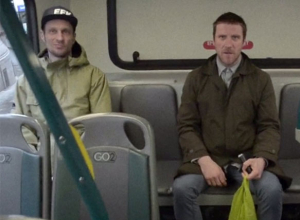 Sleaford Mods are an abrasive post-punk duo from Nottingham who enjoy singing about everything from...